The 1970 Dual F.E.T. Compressor and Pre-Amplifier builds on a heritage inspired by the first pro audio "tool box" compressor, the illustrious Drawmer 1960, but with a greatly expanded feature set, making it one of the most adaptable mic preamplifier/compressors on the market today. Bringing vintage audio characteristics at an affordable price.

Whilst the feature set of the 1970 is similar to the Drawmer 1960, and the layout of the controls will add to the comparisons, the 1970 has been greatly improved and the D.I. EQ has been fine tuned to be more accurate than its stable-mate, with various enhancements.

The 1970 use the latest THAT Corporation technology in the 2 mic preamps to provide ultra clean, transparent and precise recordings that can be processed at a later stage using your favourite warming method, be it saturation, valve, transformer or tape. In addition each channel is capable of 66dB of gain, with switchable mic impedance for accurate mic matching to bring out the best from any microphone used. Phantom power, phase reverse and a high pass filter are also included.

From tracking instruments via the dedicated D.I. input, to recording vocals via the ultra clean mic pre's, recording a guitar cabinet with two microphones, or a singer playing guitar, or even stereo buss compression using the comprehensive linking and mix facilities, the 1970 is the perfect versatile tool for any studio or live event. 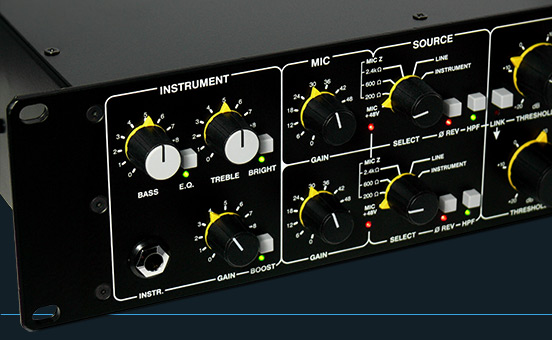 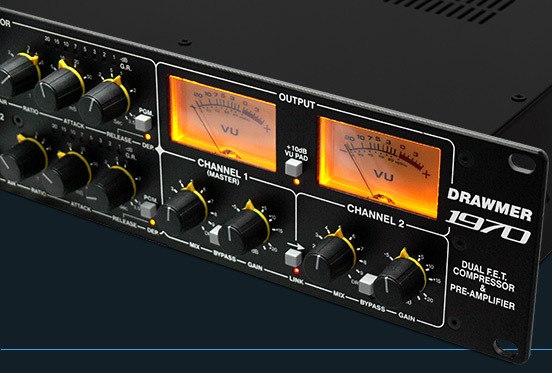 If desired the 1970 can provide an ultra clean microphone signal via the THAT Corporation mic amplifiers by utilising the fully balanced hard-wire bypass which connects the input source directly to the output without passing through the compressor FET’s, the mix and gain controls at all.

You may have encountered the general rule that the impedance of the preamp input should be 10X that of the mic to get an input impedance that is appropriate for the mic and to avoid loading the source, however, it is less known that mismatching can create some interesting tonal differences that can be used more creatively. The 1970 has 3 settings per mic input: 200, 600 and 2400 Ohms, making it easy for you to explore the various tones. The result will depend on the microphone used, as the tonal changes will be obvious with some mic’s but others will hardly alter, and on the material you're working with.

Incorporated into each channel of the 1970 are the 'Mix' Controls. They act like a 'parallel compression' effect that mixes the Wet (compressed) and Dry (original) signals to provide a simple and exact way of controlling the amount of compression used - all with the turn of a single knob.

One criticism of compressors is that it is possible to take the effect too far and ruin a mix - this is easily prevented with the 1970 by the use of the Mix control just by mixing in less of the wet signal and more dry. By the same token, the mix control can add more compression simply by adding more of the wet signal. It's that simple!

"The Do-Anything Anywhere Recording Channel. The Drawmer 1970 Dual FET compressor and pre-amplifier really is a desert island recording chain that will handle any audio source from line-level to mic to guitars or hotter synths, to low-impedance microphones."